Heidlersburg Fire Department
Heidlersburg Fire Department
News headlines
Controlled Burns
In residential areas, burning is limited to the burning of paper products, newspaper, and yard waste (excluding leaves, grass, and building materials) between the hours of 9:00 a.m. to 6:00 p.m. on Tu...
➜
Box 25 Road Closure
Saturday December 10, 2022Due to our Tractor and Tinsel Parade the following roads will be closed from approx 6:30 PM to approx 7:30 Pm with the associated detours.See 2022 Road Closures
Special Fire Police
What are Fire Police? What do they do? All Guts, No GloryThe PA Vehicle Code section 3102 – Obedience to Authorized Persons Directing Traffic states the following: No person shall willfully fai...
➜
About us

In 1812 John Heidler founded a town at the crossroads of two major roads in Adams County, Pa Route 234 and Harrisburg Road, but the town became know as Starrytown after Michael Starry built the first home in the new town. In 1961 some members of the community decided that they needed a civic organization to help promote and improve the area. That same year it was determined that the community also needed a fire company so on 10 July 1962 The Heidlersburg Fire Company was chartered.

Having no place to house the equipment the engine was stored at Paul Warren's storage garage until cold weather set in. Then it was moved to Frankenfield's Garage and then to Roy Martin's garage, which later became Lady and Taylor Body Shop.

The next purchase was a 1952 Diamond T 1560 Gal fuel truck from Agway which served as our first Tanker. This Truck was housed at John Harmon's property on Schoolhouse Road.

In 1965 Members and Contractors got together and began construction of the Fire Hall.

In 1971 the Company purchased a new Tanker Truck. The old Tank was removed from the Diamond T and mounted onto the new International and once placed in service it remained serving until 1991.

In 1972 a 1965 Mack Fire Engine was purchased from Bryn Mawr Fire Department to replace the 1942 GMC and then in 1983 a 1971 International Scout was purchased and modified to become Brush 25.

In 1987 the Mack, when the gas engine failed, was refurbished with a new diesel engine and a closed cab.

In 1989 the Medical Assist Team, later called Quick Response Team (QRT), was organized to assist ambulances on calls in our area.

In 1992 the company acquired a 1982 Ford cab and chassis and rebuilt the Tanker, placing it in service in March.

This is all we can find at this time. If anyone has additional information or photos please let us know so we can update this information.

We are asking all Members to register for the Members Only area of our Web Site. If you would register then we can contact everyone by "Emailing" a "Newsletter" to all Members. Additionally, we can open a Calendar to let Members sign up when ask to help at an event. 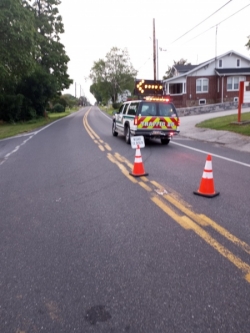 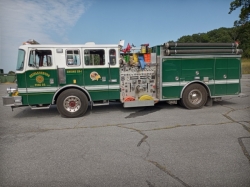